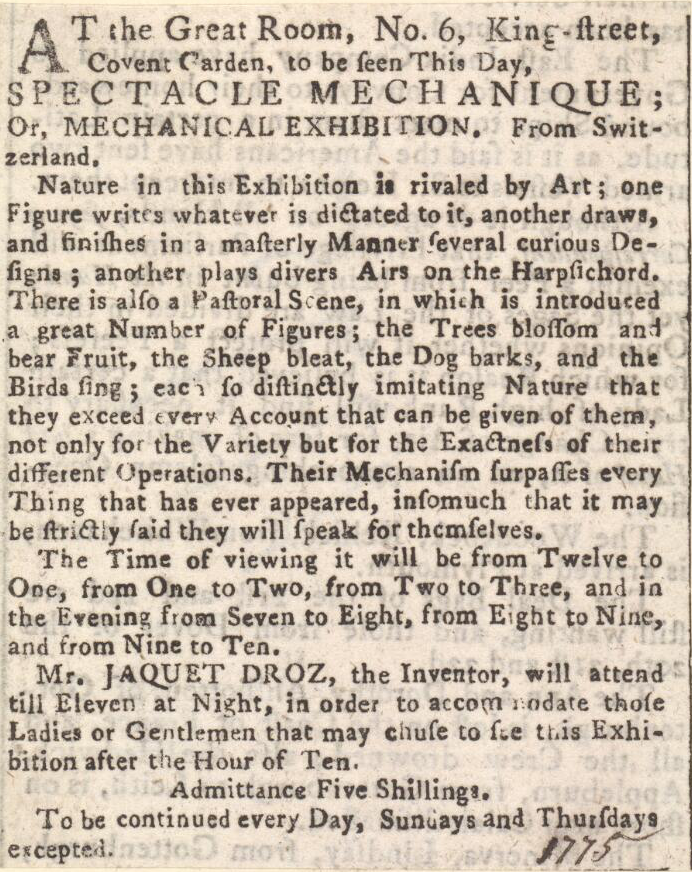 In the last post I described Henri Maillardet’s Automatical Museum, a display of automata. Maillardet worked for Henri-Louis Jaquet Droz, a Swiss expert in clockwork mechanisms. Maillardet’s was not the first such show in London, as in 1775–6 Jaquet Droz himself presented a Mechanical Exhibition there. At the Great Room in King Street, Covent Garden, the show comprised three automata and a mechanical picture of a Pastoral Scene. Such pictures had been seen since the early 18th century, with the first in London shown by William Pinkethman at the Duke of Marlborough’s Head in Fleet Street in 1709. Jaquet Droz’s picture was about four and a half feet square and showed a palace and formal gardens with fountains. Above and behind the palace was a grotto with many miniature figures including a shepherd and shepherdess playing music, grazing sheep, singing birds, and fruit trees which blossomed and bore fruit. But the main attraction of the exhibit was probably the three automata: a writer, a draughtsman and a musician, who played ‘divers Airs on the harpsichord’.

The exhibition was not cheap to enter. The five shilling admission would be probably over £20 today, but in 1776 Jaquet Droz also appears to have offered private viewings of the show for one guinea, roughly £95. 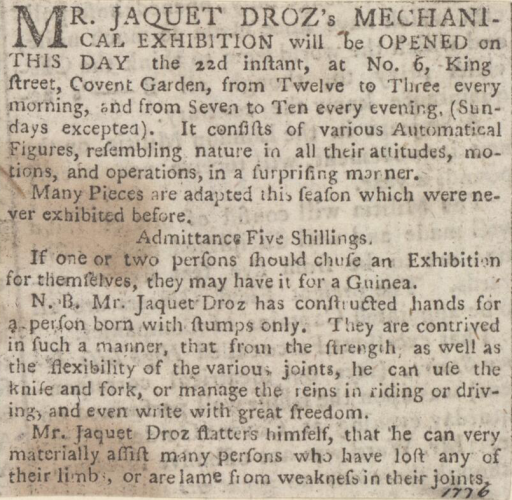 At the same time Jaquet Droz was also advertising his skills in prosthetics, having constructed artificial hands for someone born without them, flexible enough to use cutlery, ‘write with great freedom’, and manage the reins of a horse.

Some of Jaquet Droz’s automata are still on show at the Musée d’art et d’histoire Ville de Neuchâtel, Switzerland.

The adverts are in the collection of the Bodleian Library, shared under a Creative Commons Licence. 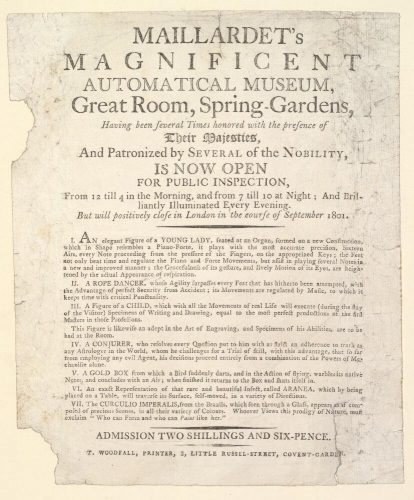 In 1798, Henri Maillardet decided to move his Automatical Exhibition to new premises. Business must have been good, because the Great Room in Spring Gardens was advertised as offering ‘better accommodation’ than the house in Howland Street, not far from Fitzroy Square. The new venue was also close to Charing Cross, a much more central location than Fitzrovia. Maillardet ran his ‘Magnificent Automatical Museum’ in Spring Gardens from 1798 to 1817. The Museum’s exhibits included automata of a lady playing sixteen different Airs on an organ, a child who both wrote and drew, a Conjurer, and a rope dancer. Maillardet also showed miniature automata in the forms of an Ethiopian caterpillar, an Egyptian lizard, and a Siberian mouse. He was the London representative of Jaquet-Droz, a family of Swiss clockwork specialists who also made automata.

Maillardet also exhibited elsewhere at the same time. In 1812 ‘Philipstal and Maillardet’s Automatical Theatre’ was open in Catherine Street, Covent Garden. In the 1820s, some time after the Museum closed, the collection was on show at the Gothic Hall in Haymarket, and it was advertised for sale in 1828. The child writer automaton ended up in Philadelphia. It was destroyed in a fire, but parts of the mechanism survived and were fashioned into a new figure by experts at the Franklin Institute.

This video is the best of a selection featuring the automaton on Youtube.

And here’s a very brief view of one of the Ethiopian Caterpillars.

The handbill is in the collection of the Bodleian Library, shared under a Creative Commons Licence.